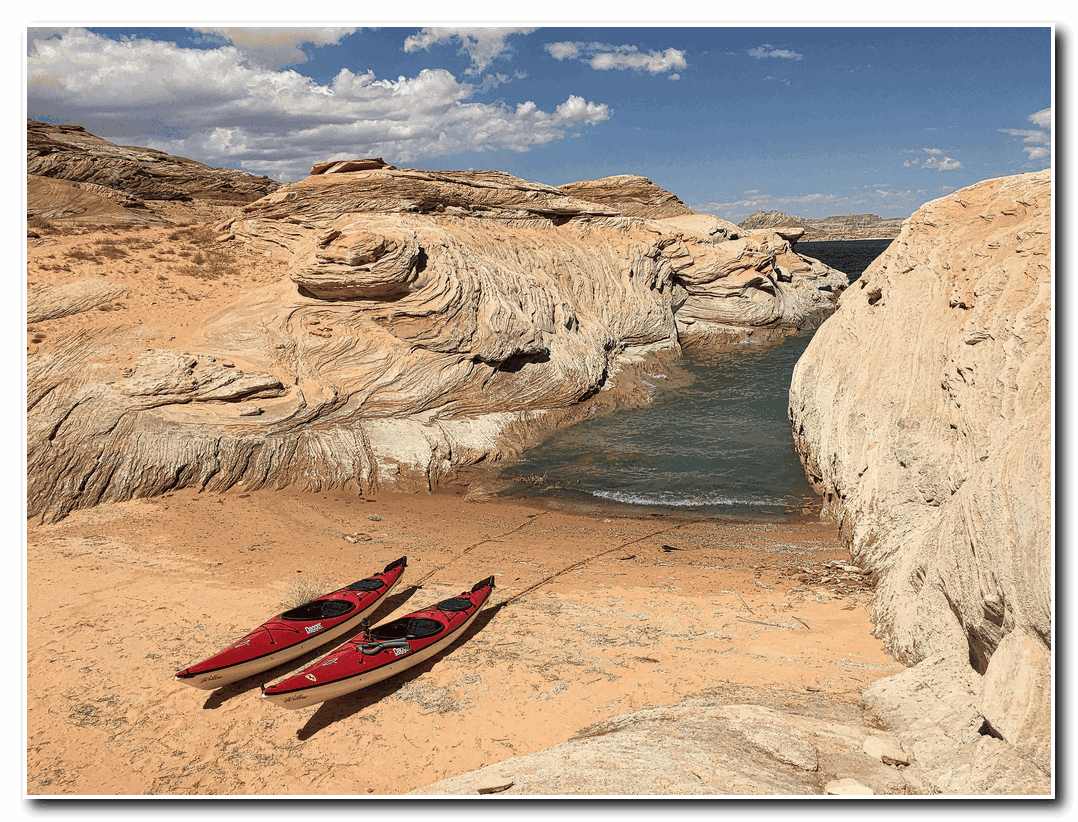 The Little Critter From Hell

We started our trip at 8 am from the Antelope Point boat launch near Page, Arizona. Our goal was to Kayak to Labyrinth Canyon about 15 miles up the lake. The August weather was clear, and by 10 am, it was HOT, about 97 degrees. Fortunately, a gentle breeze was blowing across the lake, so the kayaking was very pleasant, and we made good time. After about 10 miles we found a hidden little cove whose entrance was big enough for kayaks but too small for any boats. So we decided that this would be a perfect campsite. We pulled in and soon had our camp set up and spent the rest of the afternoon swimming in our little cove and relaxing in the shade of the beautiful rock formations that surrounded our camp. Because there was very little light pollution at our remote campsite the night sky was spectacular! Our trip just happened to coincide with the annual Perseid Meteor Shower which added to the ambiance.

The next morning, August 12th, we set out at 7 am for Labyrinth Canyon. The water was smooth and calm (no boats this early in the morning), so we made good time and soon we were entering the Canyon. It was well worth the effort of paddling all the way from Antelope Point. The canyon was about 4 miles in length and an intricate system of twists and turns beneath beautiful sandstone walls. Toward the end of the canyon, the walls narrowed down to about 15 or 20 feet. After several hours of exploring the byways of Labyrinth Canyon, we started back to camp. Kayaking on Lake Powell after about 9 am is not for the faint of heart. The wakes of dozens of houseboats. runabouts and jet skis ricocheted off the rock walls along the lake creating a chaotic, churning mass of 2 to 3-foot waves that made the going interesting but difficult. (One old-timer told us that kayakers refer to the lake at these times as the “washing machine.”)

In the early afternoon, we got back to camp and settled in for a quiet afternoon and swimming in our cove reading in the shade. We also prepared for our paddle the next day back to Antelope Point.

About 2 am, as I was sleeping peacefully minding my own business, something ran across my face. I assumed it was a fly or some such creature of the night and flicked it away. Bam! I bolted upright. Something had bitten or stung my little finger. It stung about 5 times as much as any bee sting I have ever had (and I’ve had quite a few in my time). I picked up the flashlight and began looking for the culprit thinking that it may have been a spider. After a few minutes, I found, what I thought was the culprit. A brown spider. By now my whole hand was on fire. Katherine and I corralled the little bugger and put him in a plastic bag if I might need to show a doctor if things didn’t improve.

After this interruption, I tried to get back to sleep but that proved to be harder than I had hoped since now the pain a gone clear up to my elbow, and by 4 am it was to my shoulder. Finally, at about 5 am sleep was not going to happen so, Katherine and I got up and started breaking camp. We figured it would soon be light enough to start our return journey. As I was putting gear into our kayaks, while Katherine was stuffing our sleeping bags she called out, “what’s this.”

“This” was a bark scorpion.

He had apparently been hiding under my sleeping pad during the night and had ventured out to explore my face, sting me and return to his hiding spot. We captured him, put him in with the aforementioned spider, finished packing, and set off for Antelope Point.

It was a beautiful morning, with great sunrise, and calm waters. My arm’s pain had decreased from about a 9 to 7 with numbness only up to my elbow. Things were looking up!

The effects of the scorpion sting wore off in about 48 hours. Katherine’s and my memories of our Lake Powell kayaking adventure are all good, but should you decide to follow in our footsteps, WATCH OUT FOR THE DAMN SCORPIONS!!!!!